The Priestess of Lindos, by Vasiliki Savvidou-Mihalarea 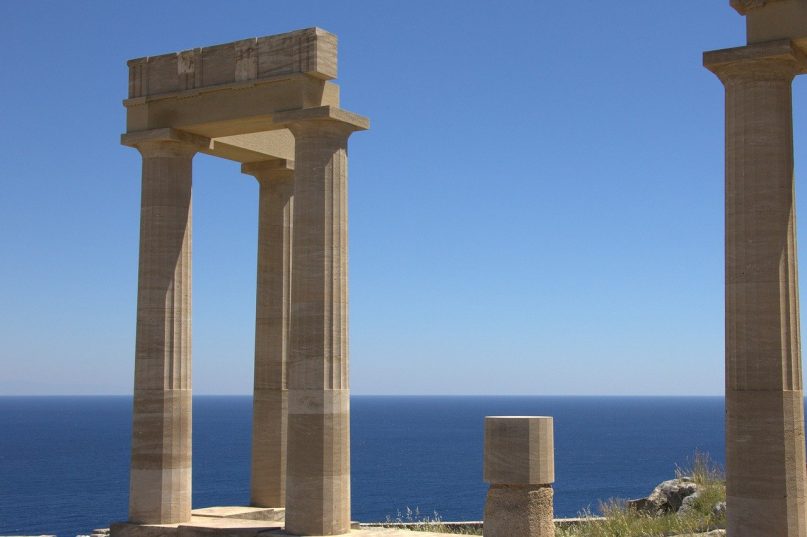 Vasiliki Savvidou-Mihalarea is a Teacher of English, Translator/Interpreter  and lives at Rhodes, Greece 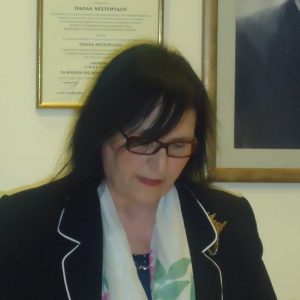 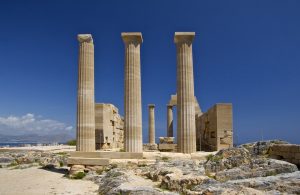 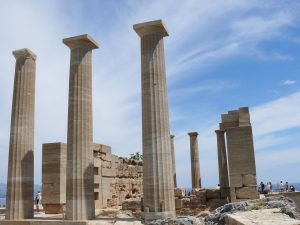 The plane landed late in the afternoon, when the autumn colours of the orient got brighter and more intense. A huge moon was descending, slipping quietly into the silvery sea close to the airport. A bright orange colour with red flashes in the background caused awe to all visitors to the island of Rhodes in Greece. It was my first visit to the island and my mind became confused as I witnessed the mingling of the real and the unreal, the modern with the ancient, the light with the darkness and I lost awareness of the present. I was almost sure gods still lived in this part of the world. My ecstasy became stronger when I had found myself in a taxi on my way to meet relatives. The smooth ride and the carefree look of the driver made me feel welcome in a place so full of magic and light. The road leading to the centre of the town was circular and along the beach where blue, silver, red and orange kept alternating creating a mystery, as if in another world. I fixed my eyes on that burning discus sliding noiselessly in the silvery sea until it went down, drowned by the huge sea leaving no ripples behind. The sweet evening took its place and invited people to the beach, to sit and sip a coffee, enjoying a moment’s eternity very rarely experienced indeed! Hugo’s verses came to my mind which I read in his collection LES ORIENTALES, and was glad to follow the same route and live again, what he had lived when visiting the orient with its abundance in light, pouring generously onto the land, giving life to the lifeless, light to the dark shunning away the black clouds of winter, filling the eyes with the thirst of life and awe. The driver sensed my amazement and admiration and shyly asked:

-Welcome to the bride of the Sun, he proudly said. Walk on the Acropolis of Lindos to meet the goddess, he said, and you can see her descending from the sky. Everybody sees her. She appears everyday especially in the summer. I smiled thinking he was making fun of me! He was so serious when he was saying all this that I did not know what to think. I got off the taxi just outside my aunt’s house, where everybody was expecting me despite the fact that they would put me up for over a month and they were not well off. However, my aunt’s family were very happy to see me and we all shared good homemade and home freshly cooked food on a daily basis. Relatives offered to show me round Rhodes and get to know the places and experience lifestyles in the villages, which were very traditional.
-I will take you to Lindos, my first cousin said. We have not been there for a long time, he continued, and it will be a good opportunity for all of us to see it. I was looking forward to it and the taxi driver’s words came to my mind. I smiled to myself thinking of the “silly” things he told me about the goddess.

The next day, on my visit to Lindos and the Acropolis, sitting on the white, cool marble seats of the ancient stadium on the Acropolis of Lindos,, I did see a beautiful lady( a tourist) walking towards the temple in a long white dress from  a plateau  of a hill and she looked  as if  she was descending  from the sky!! The taxi driver’s words came to my mind again, as she did look like the priestess in ancient Lindos. The skyline and the top of the ancient theatre looked as if one was touching the other. Therefore, the appearance of this young lady seemed to have fallen from the sky. The secret? The architectural design of the ancient stadium!! Ancient Greeks’ wisdom!!

Time was passing fast and  my holidays on this lovely, magical island were coming to an end. I was trying to enjoy as much of it as I could without putting my relatives into trouble, having to take me to different places of the island , to experience Greek life. I was only used to life on another island, Cyprus, but there was a striking difference between the two islands. Despite the fact that the language spoken is common, Greek, there was a difference in lifestyle, customs and habits. Cyprus being a British colony for many years, had acquired the British way of thinking and behaving. There was more discipline in Cyprus and people are not as noisy! However, living in Rhodes, in Greece, and having studied the history, mythology and classical Greek, I  had the impression I would encounter a place where only ancient Greeks lived. Places such as Lindos and Kameiros , the Acropolis of Rhodes brought me very close to life in the ancient times. So many archaeological remnants everywhere, so well preserved by the Archaeological Ephorates of Rhodes, kept everything in perfect condition. Restoration of so many archaeological sites, which are next to the contemporary cities, have a striking contrast; the ancient world and the contemporary world were coexisting side by side!

The Medieval Town of Rhodes, which is secluded by the long medieval walls, enclose another kind of life: the life during the period of the Knights, the Grand Masters, the Grand Master’s Palace so well preserved with the furniture and chandeliers used by them, domineer and overlook the modern harbor of Rhodes. The stone balls used by Demetrius the Besieger, are scattered inside and outside the medieval walls, silent witnesses of the Great battle against the Turks, who wanted to occupy the island. This medieval town is placed under the auspices of UNESCO , as one of the very few medieval towns, still inhabited without interruption , since its building.

The ancient stadium was a  place I could walk to and see this beautiful place, where you can still hear the spectators cheer and chant to encourage the athletes to struggle for their ideals and for their values. White marble everywhere . Seeing people running round and round trying to keep fit, brought to my mind scenes from ancient Greek athletes. I turned my face on one side, and my eyes met with  modern civilization, I turned my face to the other side and my eyes met with  ancient civilization. A particular part of the Medieval town is a mosaic of different ethnic groups that lived on the island  as for example, Turkish, Jewish, Italian, all co living in peace and in collaboration without hostilities. 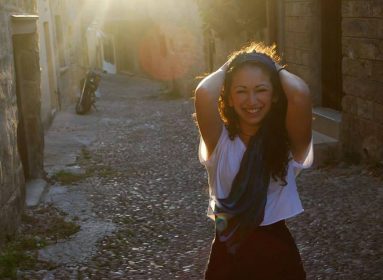 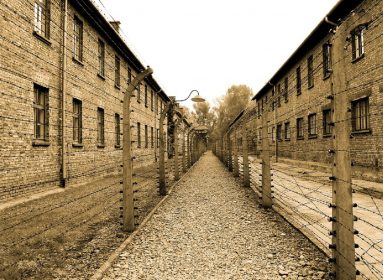 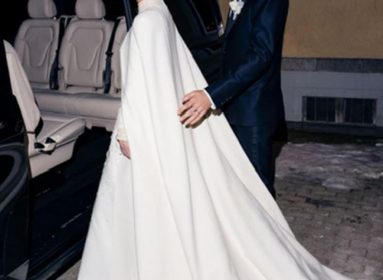